At the corner of Hartland Road and Northumberland Ave stands a taxpayer funded £28 million building on supporting land, purposefully “designed” for education.  Was it money well spent?

Since its inception, 10 years ago, the Academy has extended its reach to property once designated for community leisure and for other important community services like “Sure Start”, (now housed in the dilapidated South Reading Community Centre and under threat).  The purpose of this extravagant school was to provide education within a community that historically returned poor educational achievements.  And let’s confront it, the school is still returning the lowest standards in the Borough as it hops in and out of special measures.  Ostensibly there is little noticeable change in standards from when it was Thamesbridge School, save that its catchment has extended to as far as the borders with Abbey Ward and include Kennet Island.

The school bears the name of one of Reading’s leading developers and publisher; at least that is how I look at John Madejski in the context of the town.  The Council provided land for Reading Football club which now is extending into a controversial complex of flats, conference centres, more hotels etc.  The land included the site on which a substantial retail park was built, housing B+Q through to PCWorld.  Then there is Station Hill, and its humongous plans.  Into the Academy, Sir John, as he is today, generously donated £2 million to support the school’s charitable goals, as stated in the 2007 accounts.  The purpose stated at the time by the Department of Education was to gain local support and insight, hence leaving overall management to the sponsor.  Its sports specialism (football and basketball) together with its direct links to Reading Football Club and Reading Football Club Community Trust provide arm’s length chargeable services to the school and essentially delivers the USP of the academy over other Reading schools.

I say this because I want to focus on the school and not personalities.  The media in Reading has made it very difficult to separate the generosity of a person from utilitarian essentials and life-skills; yet, this Whitley must do.  A society is made up of a network of public funded connections – leisure, schools, social services, transport, policing etc.  The Academy is publicly funded by the Education Funding Agency.

Unless I have missed something I do not think that Sir John would say that he is an educationalist, but would acknowledge that he intended through his donation and support of the school to facilitate education within Whitley, South Reading.  I will go a step further by saying that he should be given credit for an academy being built in Reading as the Government wanted his sponsorship for a London school.  It was not without its dissenters.  I recall the teachers’ unions being opposed to the academy and perhaps in hindsight, arguably correctly so.  If my memory serves me, Thamesbridge’s standards were improving at the time.

I think a bit of context would help here.  Whitley children before the Academy was built had the option of Wokingham run Ryeish Green School, (now the free school, Oakbank).  These doors soon closed as a decision was taken to exclude Whitley intake with the advent of the Academy.  The Academy therefore had greater responsibility for their local catchment.  The new school on the block ultimately had a huge unintentional impact on the community. 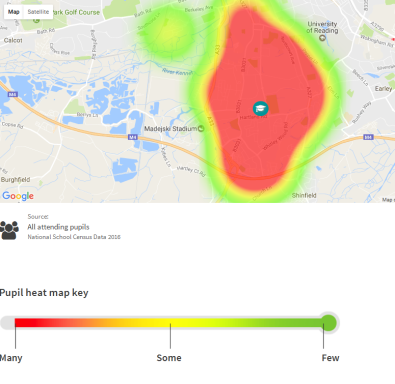 Whitley needs to have a serious conversation about “education, education, education” and why this school has ostensibly failed in its goals and essentially why it needs to change its ways?  The philosophy behind the school from what I have seen in its accounts, in its decline, in its approach is as far as I am concerned bankrupt – its eagerly anticipated 2015/16 set of accounts will be telling in terms of sustainability.  Until the Council and the Government acknowledge this, all that is being grown is denial – denial that several generations of children have been failed badly and irreversibly – their life-chances have not improved and at best stagnate.  My view is the Academy will progressively worsen as a result of Reading’s increasing demand for good quality teachers, who can energise learning – the foundation of education.

Change at the Academy cannot be achieved by tinkering at the edges and changing head teachers.  It needs to be consumed as bankrupt stock and the government charged with delivering a new approach.  Politics, being what it is, will continue to throw good money after bad because of overhype and pride – may I say the two killers of progress in Reading?  I am not so naïve to think that a change in control alone is the answer, but it brings about fresh thinking and Whitley is capable of playing more than second fiddle to the aspiration of lead councillors’ fantasy plans for a densely constructed city which is not inclusive of the needs of all.  Whitley’s foundations are rotten to the core.  The Councillors’ failing is simply put as indulging unsustainable development of the area.  There lies the conundrum, the ability of those in less well to do families to change their destinies.  How can they benefit from an employment market which demands educational attainment – is that not the direction set for the town?

I am in no doubt that the academy has taken some pupils to entry standards required of universities, but it is something I would expect given the extended catchment from Thamesbridge days. Yet, given the growth in population, the school is not functioning anywhere near full capacity with 885 pupils (925 in 2014/15).  The signals that all is not well are the numbers of pupils who are persistently absent, (some 9.2% against a national average of 2.76%*). Unquestionably the school’s pupil profile reflects their financially and socially challenged background with some 25% of pupils receiving free meals.  And this is both the root cause of the problem and essentially an indicator of its failure.  Is the Academy and Reading Council doing enough to change their ethos towards study as a means towards self-improvement both within the pupil population and importantly among their parents?  Success is achieved by facilitating change both within and outside the school ground. And Whitley is in crisis because it totally lacks the facilities to expand social horizons within the community and I am not just highlighting AcademySport.  Plans are there to close the library and reduce children’s centres.

This brings me back to the point I am making in this piece.  The school was built to improve the life chances of pupils from a group of families who face, even without austere times, meagre job prospects delivering hard grafted, well below average incomes of the town.  For Whitley to get away from being the underprivileged sector of Reading they now have the opportunity for change by taking a crisis, and the Academy is in crisis, to a new positive future.  However, it demands that the role of the school and its management is redefined and AcademySport jettisoned or at least focused on the community and not the football club as the recent pitch improvements indicate.  It demands that the school is not looked at in isolation of the community but integrates into community.  Notwithstanding this Reading Football Club is a very different creature to the one 10 years ago and is of itself in a state of financial and ownership limbo.  The rationale for the school needs to be entirely re-examined and now is the time to do that in public.

At the heart of education are teachers and whilst it is all well and good for the Council to pledge to reduce their working hours, the Councillors should perhaps have debated how they were going to fill the hours lost to such a move, because surely what the teachers are saying are they cannot cope with the demands being made on their time in the service of education, as it now stands.  The crisis in education is brought about because there are too many schools chasing after the crème de la crème of educationalists and schools with motivated parents like the new Heights School will ensure that they get more than their fair share and at the expense of others.  The John Madejski Academy lost a great many of their solid teachers because of management.  No school can afford to lose that dedication to supply teachers if for no reason than on recruitment costs as the Academy demonstrates; especially when your income is derived per pupil.

Whitley is not geared, as Caversham is, to challenge the status quo and by that I mean challenging the politics which is playing havoc with the prospects of a society prone to servitude and who, perhaps, kowtow too much to the pressures of their perceived betters – their employers, and their benefactors.  Whitley is not ordered with groups like CADRA or WADRA or a civic society, but is pervaded with an attitude that believes people who have achieved or belong to Labour know what is best.  Perhaps I am being too simplistic here, but it serves to illustrate that part of the problem is reliance on others to develop a cohesive society when in a less sufficient position.  And you should never bite the hand that feeds or puts a roof over you, should you?

I have shown that Councillors have got leisure so wrong and others have proven that they failed at the JM Academy (and indeed at Reading Girls School), at social care, and at planning.  Indeed the Council have demonstrated poor financial management as exampled by their recent audit.  There lies the real issue – not the school, not the people, not the area, but he who has authority to shout loudest gets the better of those who are humble and expecting of the modest, when an educationalist might say: we are all created equal and deserve equal consideration.

It is essential that John Madejski Academy is turned round and that, I am afraid, means the Government, not the Council needs to intervene.  But surely it cannot be turned round without being critical of what the Council offers by way of services to Whitley either?